You are here: Home Round Table FISME-SIDBI organizes roundtable meet on GST: Identifying implications and facilitating adoption by MSMEs 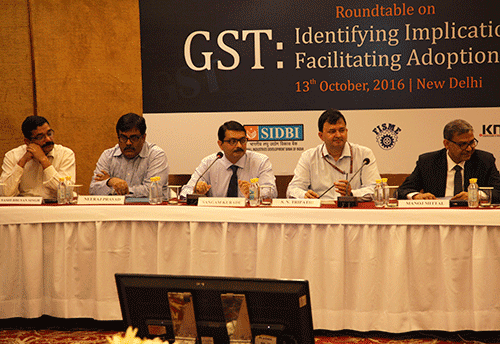 A path breaking indirect Tax reform is underway in India as GST is being rolled out. Its repercussions will be felt by all economic sectors- small or large. To apprise MSMEs of the current state of debate about GST and to elicit their feedback to develop a capacity building agenda for smooth adoption by MSMEs, SIDBI and FISME are jointly initiating a nationwide campaign to hold a series of roundtables and webinars.

The first roundtable meet of the series was organized today at India Habitat Centre in New Delhi.

FISME President Dr Sangam Kurade, in his opening remarks, said, “GST will be a game changer not only for the Indian economy but also for the global economy.”

He said, “There is a lot of eagerness and apprehensions among the MSMEs with regards to GST. It will surely not be easy for the micro and small entrepreneurs who were not under the tax ambit so far but will not be a part of GST due to lowering of exemption limit from Rs 1.5 crore turnover to Rs 25 lakh.”

Dr Kurade said lot of handholding has to be done to help MSMEs adopt GST and a lot depend on the government on how they play the balancing game.

S. N. Tripathi, Addl. Secretary and Development Commissioner, MSME, who was the Chief Guest at the event hailed FISME and SIDBI for organizing the roundtable.

Sharing his views on GST, Tripathi said, “Anything that anything that lowers the price for consumers helps the manufacturers ultimately. The MSME Ministry is working with the MSMEs to make to more acceptable to the sector.”

He said MSME Minister Kalraj Mishra will be meeting the MSME Associations tomorrow in which he will seek views from the industry representatives on GST.

Tripathi advised that earlier the tax is paid, earlier the reimbursements would be made. “This will ensure that more working capital is available for the MSMEs.”

Mittal highlighted there are 11 to 12 industries that are getting affected directly due to GST including financial sector, technology, retail etc.

He said GST will help bankers access authentic real time data rather than depending on proxy indicators.

He said, SIDBI along with FISME, is handholding the MSMEs for implementation of GST through roundtables like this, webinars, handbook etc.

Bimal Jain, GST Expert said GST will subsume many central as well as state taxes and do away with cascading of taxes and avoid double taxation.

He said GST will surely help fulfil PM’s vision of one nation- one tax.

Government of India is all set to implement the Goods & Services Tax from April 1, 2017. In order to ensure smooth transition to the GST regime for small businesses, the Federation of Indian Micro and Small & Medium Enterprises (FISME) in association with Small Industries Development Bank of India (SIDBI) is also conducting a study on “GST: Identifying implications and facilitating adoption by MSMEs”.

FISME and SIDBI would be organizing 5 Roundtables in metro cities/ important MSME districts/ clusters. There would be 10 Webinars at cluster/ state level in which 200 MSME associations will be consulted.

FISME would also publish a Handbook on GST for MSMEs and set up a dedicated portal on GST for the benefit of the MSMEs.

After New Delhi, the roundtables will be conducted in cities including Mumbai, Lucknow, Bangalore.

In addition to officials from Government of India & SIDBI, several domain experts shared their thoughts & vision on implications of GST.

FISME is a national body of MSMEs association with a network of more than 700 associations.